Here’s a map of the world that Bride to the Sun is set in. Shay and Medyr meet in Arrashar, the capital of Sikhand, but Medyr is from Aneirion, which lies further north beyond the Mountains of Dawn. His family lives in Averdin, on the coast, but on his mother’s side he also has cousins from the Northlands.

As for Daughter of Wolves, that takes place at the edge of the Khotai’s lands, in the mountains east of Kharshaan (where Kiarash is from).

A more detailed map of Aneirion and the places mentioned in Elephant Thief: 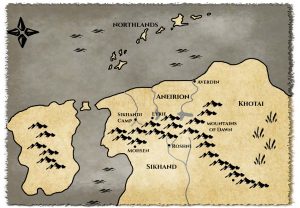 And for those of you interested in the magic system, this diagram shows the Circles of Dominion that govern the equilibrium between the five elements: each element dominates two others and is dominated in its own turn by the remaining two: 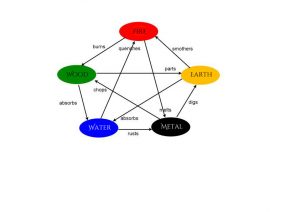