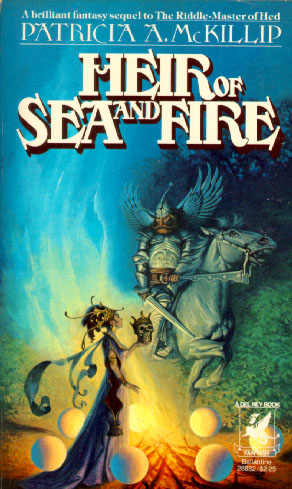 A reader recently asked me for fantasy recommendations and as I stood in front of my book case, my eyes fell on the Riddlemaster Trilogy by Patricia McKillip. Together with The Lord of the Rings and the Dragonriders of Pern series, these books were my introduction to fantasy and I’ve loved the genre ever since.

I originally bought ‘The Heir of Sea and Fire’ first (the second book in the series), simply because I was intrigued by the cover – the scene where Raederle, the heroine, bargains with one of the dead Kings of Hel by offering his skull back. But once I started reading, the story sucked me in and I had to get the other books as well.

Patricia McKillip has a truly magical way with words, her descriptions are poetic and spot on at the same time. This, for example, is how she introduces the ghost of King Farr of Hel: He was, as she imagined him, a big, powerful man with a wide slab of a face hard as a slammed gate. The world she has created matches her style, deep, diverse, with a long history and full of magic.

The protagonist of the series is Morgon, Prince of Hed and a riddle master. He has been born with a pattern of three stars on his forehead and the story follows his journey as he has to discover their meaning – for this is a world where unanswered riddles can prove unexpectedly deadly. Raederle, the woman he loves (’the second most beautiful woman of An’), goes looking for him and together they face the dangers his stars have called up from the past.

I love the way Patricia McKillip has woven the idea of riddles through the whole story. Answering them teaches you something about the world and yourself – there’s even a whole College of Riddle-Masters! Altogether it’s a world you can lose yourself in while reading, like a rich, slightly faded tapestry of events long past.

The books are now available as a single eBook on Amazon and very much worth buying.