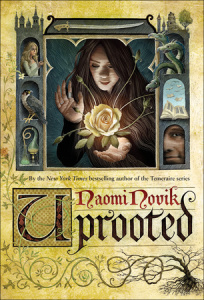 Naomi Novik is probably best known for her Temeraire series, which is set at the time of the Napoleonic wars in an alternative world where there are dragons. Since she hits two of my interests at the same time – dragons and history – I’ve read and enjoyed all the books of that series. Uprooted, however, is set in a completely different world, based on the fairy tales of the author’s Polish heritage.

The heroine, Agnieszka, lives in a valley bordered by a cursed wood at one end and ruled over by a magician called The Dragon. Every ten years this magician selects a girl to serve him in his castle and invariably after ten years’ service the girl then moves away, leaving her family behind. When the next choosing comes up, everybody thinks that Kasia, Agnieszka’s best friend, will be chosen, but of course The Dragon picks Agnieszka instead.

The story starts leisurely, but then intensifies as Agnieszka is pulled into the struggle that The Dragon fights with the wood and we gradually discover why the ancient presence that rules the wood is so hostile. The author does a really good job of building up a slow feeling of oppression, of hinting at the dark and overwhelming power of the woods and how the wizard is fighting a losing battle.

As for the heroine, Agnieszka is a spunky, likeable character, who stands up for herself and her friends. Also though there is a love story, she’s not reduced to just that and her relation with her best friend Kasia is equally important. Altogether I found the story a good read, especially if like me you enjoy fairy tales.